Many invasive species of longhorn beetles (Coleoptera: Cermabycidae) cause significant economic damages in agro-forestry ecosystems. These species are difficult to control with traditional chemicals, as they spend most of their life cycle hidden in the wood of the host species or packaging materials, where they remain protected from environmental conditions and from insecticides. In China, the use of natural enemies - and in particular of parasitoids of the genus Sclerodermus - has shown the efficacy in the biocontrol of some invasive xylophagous. In Europe, the biocontrol potential of native Sclerodermus species is being evaluated in order to develop efficient mass rearing techniques to be exploited in the control of the invasive Asian longhorn beetles. This study has deepened the knowledge on the performance of Sclerodermus brevicornis. Females that have already reared their offspring on the host until they emergence, were able to reproduce again on subsequent hosts. Furthermore, the survival and reproductive performance of the females on the host were tested after being stored for different periods at different temperatures. The results showed that the longevity of adult females decreases with increasing storage temperature and that many aspects of reproductive performance are negatively affected by high temperatures. Tolerance to low storage temperatures (4.5 ° C) can allow the optimization of the use of S. brevicornis in mass rearing programs. 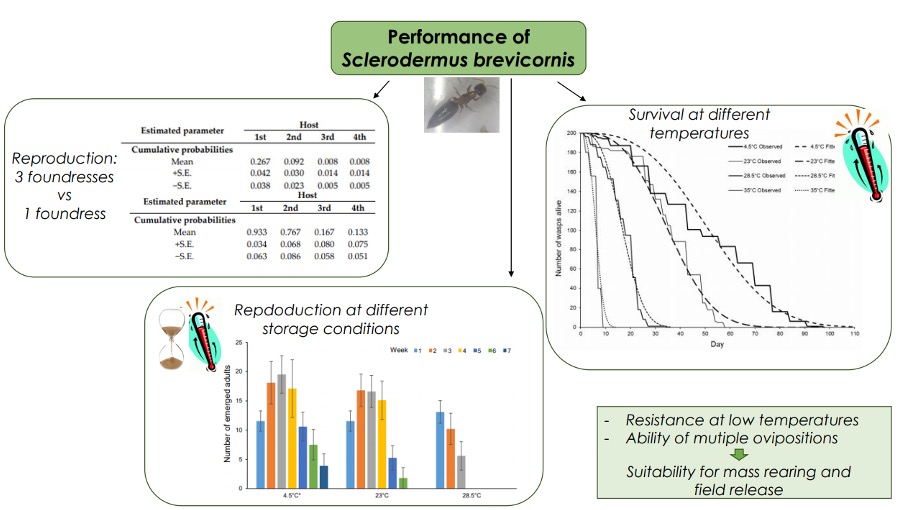